A general quantum system will consist of many different subsystems that are entangled and interacting with one another.  These subsystems can be distributed to spatially separated quantum laboratories, thereby forming a quantum network.  One scenario of both practical and fundamental importance arises when the individual quantum laboratories are unable to exchange subsequent quantum information with each other.  Instead, they can act on their initially shared entangled states only by locally probing their respective subsystems and communicating with each other through the exchange of classical messages.  This operational paradigm is called local operations and classical communication (LOCC), and it provides the basic framework for studying distributed quantum information processing. 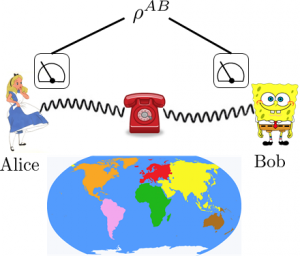 The simplest LOCC scenario involves two parties, generically called Alice and Bob, who initially share a two-part quantum system in state \(\rho^{AB}\).  Alice can perform a sequence of measurements on her half and Bob can do likewise on his half.  To coordinate their measurement strategy, Alice and Bob communicate classically over a telephone.  Our research involves studying a number of important issues relevant to this setting.